Following our successful first ever International Futsal Tournament, Chairman Simon Wright is eager to get preparations for next year underway.

Wright watched on as Manchester claimed their first silverware of the new campaign with a comfortable 10-1 victory over Doncaster Deaf Futsal in Sunday’s final, while the Club’s U12s saw off Bolton 6-3 in their final.

Bolton’s U10s were crowned champions as they beat Socatechnix 2-1 in a thrilling weekend of futsal at the National Cycling Centre.“Considering that this was the first edition of the Manchester International Futsal Tournament, we're really pleased with the event that we delivered,” stated Wright.

“It's great to bring the futsal community together under one roof and getting to know some more people who are passionate about developing futsal is always really rewarding.

“The response from the spectators, coaches and of course the players showed how well this event went. We received a lot of positive feedback on the high level of organisation and entertainment we provided over the two days.

“The whole tournament was professionally run from start to finish and we created many brilliant memories for everyone to take away; that was our aim when the idea of the event was conceived and I think we delivered that.”

Perhaps the main positive to come from the weekend was our newly formed relationships with Moldovan side FC Victoria Buiucani and Estonian outfit FC Cosmos as the Club continues to forge friendships worldwide.

“We enjoyed interacting and learning from international clubs that we invited over,” continued the Chairman. “They were great people to host and I am sure that they left Manchester to return to their home countries of Moldova and Estonia with a lasting impression of Manchester International Futsal Tournaments and the city itself.” 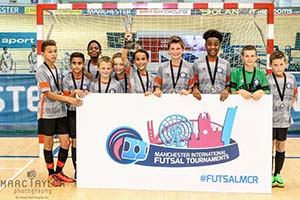 The Manchester brand is becoming more recognisable across the globe and the Club’s reputation within the world of futsal has increased significantly over the past few years, and with more tournaments on the horizon the stature of the Club will only continue to grow.

With both MFC youth sides putting in positive performances at the weekend, the future is indeed bright for a Club that continually emphasises the importance of home grown talent.

“I think everyone I spoke to thought the U10s and U12s tournament was a big highlight of the two day event,” admitted Wright. “The quality displayed by all of the clubs involved demonstrated that young kids really love futsal and are learning the game very quickly.

“We're just pleased we were able to give them an exciting stage to perform on as these are the players of the future, which is a good sign for English futsal.”

Excitement still surrounds the Club almost a week after the event, but Wright is already forging ahead with plans for the next tournament, which he believes will be bigger and better than this year’s.

“The planning starts now for next year and we're confident we can make the Manchester International Futsal Tournaments 2016 even bigger and more attractive for international clubs,” said Wright.

“We already have planned a stand-alone youth tournament and a bigger men's event with a women's tournament also included. We'll start to get information out soon so that clubs can plan their trip to Manchester.”

We’re looking forward to it already!