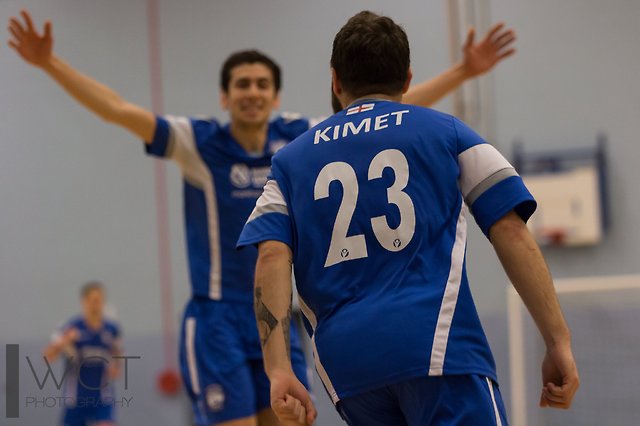 In what could be the game of the season, Manchester Futsal Club defeated London Genesis Futsal Club 8-7 at Belle Vue Leisure Centre.

Before today many futsal fans would be excused to think that this game would be a quite end of season fixture, however it was anything but!

The game had it all! A red card, three penalties, a coach sent off and 15 goals! Truly, a game of the season contender!

Manchester Futsal Club Captain, Sam Richardson said the game was definitely one to remember and an honour to be a part of.

“We've played Genesis a few times over the years as both clubs have been involved for a relatively long time and their style has always been energetic and direct, so I was personally expecting it to be similar, and they brought that and more.”

He went on to say that the heated moments throughout the game and the number of goals made it a really special futsal game.

“Everyone on both sides played with a great spirit and will to win that made it entertaining for everyone who was there playing, participating or watching. Of course, it brought a few flash moments, but I think the emotional inputs added to it all and made it a good spectacle.

Genesis started the game strong, picking up the first goal of the match through their captain Adam Barr, who converted from close range.

Manchester started to work their way back into the game, and in the 10thminute of the half the team got its equaliser through Kimet, after he finished a cross from Danny Stapleton.

Genesis racked up five fouls soon after conceding an equaliser and in the 16thminute Adam Lavin converted a rebound from a Doug Reed penalty, sending Manchester in front.

Two minutes later and Jordan Edge put the home side further ahead after he blasted the ball in to the top of the net!

The first half finished 3-1, with three yellow cards dished out, one each to Jordan Edge from Manchester, Adam Barr and Iuan Dju of Genesis, Dju got his card whilst on the bench! 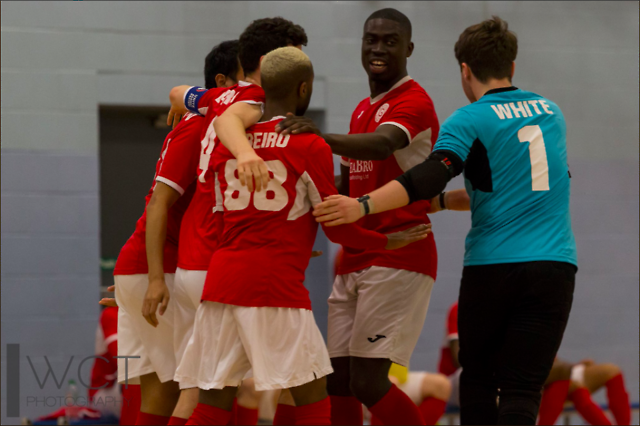 The second half started with a bang as Genesis came out from the dressing room fired up! After three minutes of the second half they scored three unanswered goals and retook the lead!

Sarmento scored the first of Genesis’ second half goal, then Ribeiro got back to back goals, one from the penalty spot and one shot which hit both posts before going in.

A minute later and Genesis extended the lead through a solid set piece play, this time Iuan Dju the goalscorer.

Adam Lavin pulled a goal back for the home team in the 27thminute, and this ignited another comeback in this rollercoaster game!

Manchester Futsal then scored back to back goals to send them back in front, this time Kimet scoring both and getting a hatrick in the process.

Soon after Kimet sent Manchester in front, Genesis star man Ribeiro, got his team level after a great solo goal.

With the scores level at 6-6 and only 3 and a half minutes remaining in the match, the game descended into madness.

In the 38thminute, Kimet scored his fourth goal and Manchester’s seventh, sending the home side into the front and dramatically after scoring, Genesis player De Almeida struck Kimet i the face and was sent off in turn.

Genesis then switched to a fly keeper tactic, which left them vulnerable in defence, and Debon and Kimet worked together on the break to score, and what most people thought would put an end to the match.

However, in the final minute of the match Genesis were awarded a penalty, which was confidently converted by Ribeiro, which brought the game to 8-7 to Manchester. After the penalty was awarded, Head Coach Sergi Saldana was sent off and asked to leave the arena.

The final 30 seconds felt like slow motion for on-watching crowd, however the home side held strong through the tense final stages and won what could easily be the game of the season.

Special mentions must go to Kimet of Manchester Futsal who scored 5 goals and really contributed to his side winning the game. As well as him, Ribeiro from Genesis needs to be recognised for an amazing solo performance.

If every game for the rest of the season are only a little like todays match, then Manchester and Genesis futsal fans are in for a treat! Don’t miss Manchester Futsal Club’s next match against Salisbury United next Sunday!