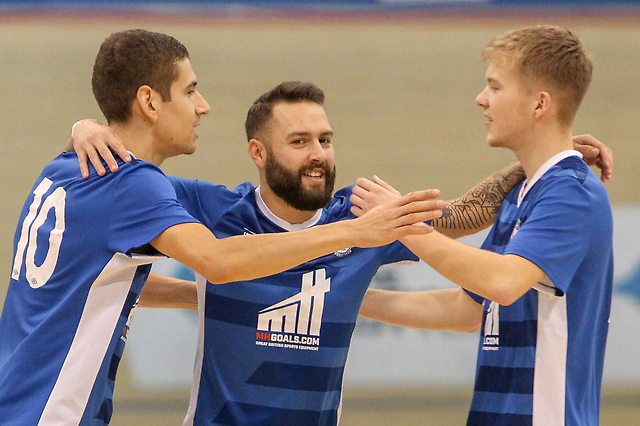 After a long Christmas break, futsal action returns this afternoon as Manchester face a tricky trip down to the country’s capital to face league leaders London Helvecia.

The Blues broke off for the festive period with a spell of good form, four wins out of a possible six and 19 goals scored in the past three games alone. Manchester find themselves fourth in the FA National Super League at the half way stage and have provided themselves with the foundations for a strong league finish come the end of the season.

Last time out saw Peyman Sarlakchivaei make his debut after his switch from Birmingham, which turned out to be an unforgettable day for the Iranian national as he hit a brace in what was a eye-opening display against Reading.

Raducio King completed his first hat-trick of the season at Belle Vue in the same game and has arguably been one of Manchester’s most important players this campaign. With 12 goals in 7 appearances for the Blues so far this campaign, the Dutchman will be looking to continue the same run of form going into the second half of the season.

Today’s hosts London Helvecia have had a perfect season so far, with 10 wins from 10 and maximum points which see them sit nine points clear at the top of the Super League table. The last time these two teams played it was the London-based outfit that went home with the points after a 11-1 victory.

Led by England captain Raoni Medina, they will be wanting to replicate their perfect record going into the tricky end of the season with the likes of Joao Toti Ferras, Richard Ward, former Blue Stuart Cook and Calvin Dickson all in double digits for goals scored so far.

Blues boss Sergi Saldana understands the challenges that are ahead for his side but has told Manchesterfutsal.com that his side has options to win the game and to bring the points back to Manchester.

“We have to play hard and use our tools to beat them. I know how we can do it and if we make a serious match we can win. They aren't invincible so we have to trust in our work and how to approach this game.

“To give the game for lost would be stupid because despite the casualties, I think we will have our options if we do what we know that we have to.”

The Super League encounter will take place at the Moberly Sports Centre, with a kick-off time of 4:20pm.