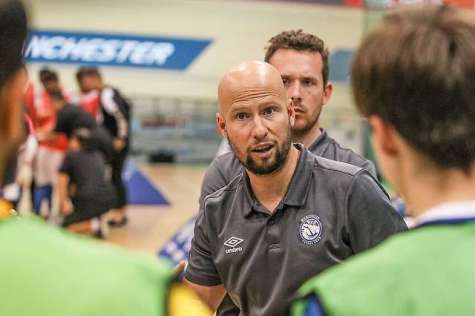 Sergi Saldana could not hide his disappointment after Manchester were beaten 6-4 by a resolute ProFutsal London side.

Denerson Moreira was the difference as his hat-trick helped the Blues' opponents to their first-ever win in the NFS, goals from Jared Rand, Russell Goldstein and Jeff Adubofour contributed to the goal tally at the Medway Elite Sporting Venue, Gillingham.

Skipper Sam Richardson's goal just before half-time brought the game to 2-1 to Pro. However, a red card from England international Jordan Edge dealt a significant blow to Manchester's efforts. Goals from Jordi Texido, fly-keeper Junior Sousa and Harry Tozer were the Blues' best efforts, but eventually not enough to seal the three points.

Head coach Sergi Saldana was full of praise for Pro and believes they will be competing near the summit of the NFS throughout the season.

"As I said before, the teams at the beginning are a mystery", he said. "Now that I know ProFutsal I can say that they will be a top team in the league. They are very strong physically and they know what they play. A very compact team."

"We made some mistakes that it hurts us and we had to come from behind all the time and was very difficult. Despite this, we completed till last second and this is what we have to do."
Saldana was flummoxed as to why experienced player Jordan Edge was given a second yellow card two minutes into the second half.
"I don't understand how a normal fault means the referee has to show a second yellow card. We have defended giving our best during the 4v3 where they haven't scored but it's also true that then we've lost him and it has been a shame."
The boss was delighted for academy graduate Harry Tozer as he got his name on the score sheet.
"Harry played an amazing game. He has done a big step forward and if he keeps at this level, he can be very important for us this season."
With Manchester set to take on Loughborough at the National Cycling Centre on Sunday, Saldana remains upbeat about his side and his tactics.
"We have to keep doing the same kind of things, I'm pretty sure we are doing the things correctly. We just have to correct our mistakes and avoid some risks that sometimes we are taking."
Tickets are still available for matchday two of the National Futsal Series in Manchester and can be purchased here.